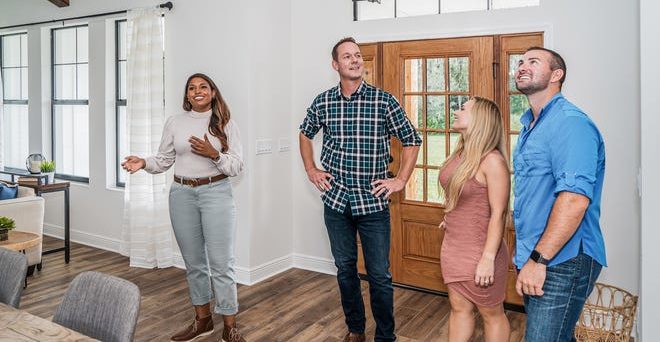 While Brian and Mika Kleinschmidt run around the Tampa Bay area turning dirt lots into new houses for their clients on the second season of the HGTV hit “100 Day Dream Home,” they’re determined that viewers also are going to learn more about the people who hire them.

“The first season of any show, you’re trying to capture every single moment, but it’s hard to jam pack this whole process into 44 minutes,” said Mika Kleinschdmit, the real estate agent and designer who works closely with clients to pick everything from flooring and tile to countertops and fixtures in each episode of the series that returns at 8 p.m. Jan. 4.

“This year, we’re going to highlight more of the story of the family and still show the construction process,” she said. “For us, it’s about telling the story and the emotions that go into designing a home from scratch and for each family, why they chose a custom home.”

While she’s busy focusing on the interior looks, her husband, Brian, leads the construction crew turning empty plots of land somewhere in the Tampa Bay area into a brand new home for a wide range of budgets and clients.

Brian Kleinschmidt has become an old hand at television, having competed in a season of “The Amazing Race” and seeking funding on “Shark Tank” for a project designed to ease potty training. The sharks didn’t go for it at the time.

He and Mika ran fitness centers in the Tampa area, and both have performed in a variety of stage productions in the Sarasota-Bradenton area. He starred in the title role of “Tarzan” at Manatee Players. They clearly like to stay busy and active.

But they have their limits.

This second season features nine new episodes, but Mika said they design and build about 22 homes per year altogether, most involving clients viewers don’t see. (Each episode shows the entire process from preparing the land to revealing the finished home to the buyers.)

“We’re not looking to build 500 houses a year,” Mika said. “It’s all about finding a good work-life balance.”

Brian said they remind themselves “every day that this should be fun. We enjoy every step of the process, and as soon as we lose sight of that, we have to remember why we’re doing it. It can become stressful, but we do love what we’re doing.”

They could be even busier thanks to the attention they gained in their show’s first season.

“We really film and build in the Tampa Bay area, but we have people reaching out to us from across the country wanting us to go to Texas to build them a house or someplace else,” Brian said. “It doesn’t work that way for us, but the response from America has been overwhelming. The show also airs internationally, and we’ve had people reaching out from Asia and South Africa.”

Through their business dirt2design.com, they stick to the territory they know best, which offers a wide variety of communities.

“If you’re in downtown Tampa, 30 minutes to the north, or 30 minutes to the east or west, there are all different styles of land and neighborhoods,” Brian said. “It shows the country how diverse our area is. And it makes the show relatable. We don’t want to just show $3 million mansions that are not attainable for most people.”

They started filming the new season at the end of July and had to deal with safety issues surrounding COVID-19. But even though their crews followed strict safety protocols on set and in the field, they try to avoid showing mask-wearing and social distancing efforts, because, as Brian explained, “it would timestamp the episodes when they are reaired.”

The pandemic, however, has revealed that “home is more important than it ever has been,” Mika said.

In addition to telling more personal stories, the couple learned a lot about time management during their first season.

“We’ve been good at delegating tasks,” Mika said. “We hired a project coordinator because if we’re out filming, we’re not answering the phones. We’re building a team.”

Typical of home design and renovation shows, “100 Day Dream Home” features its share of spouses or partners who don’t quite have the same design eye.

Mika said she doesn’t try to push couples one way or another (even if she has a preference on design choices). “We try to find that middle ground. With any relationship, there’s compromise. Our goal is to make them both happy,” she said.

As for their own home, the Kleinschmidts said they have similar tastes. “The biggest thing with us is that we’re both alpha dogs,” Brian said. “If we don’t agree on something, it takes a minute to figure out where the compromise line is going to be. Sometimes the budget line comes into play. It still ends up being fair at the end of it.”

He describes himself as “a big dreamer. I think outside the box. I’ll think of a $50,000 idea and then she’ll tell me how much it’s going to cost. I still want the idea, and we’ll then figure out how to accomplish it.”